Anxious About Your “Gut Feelings”? 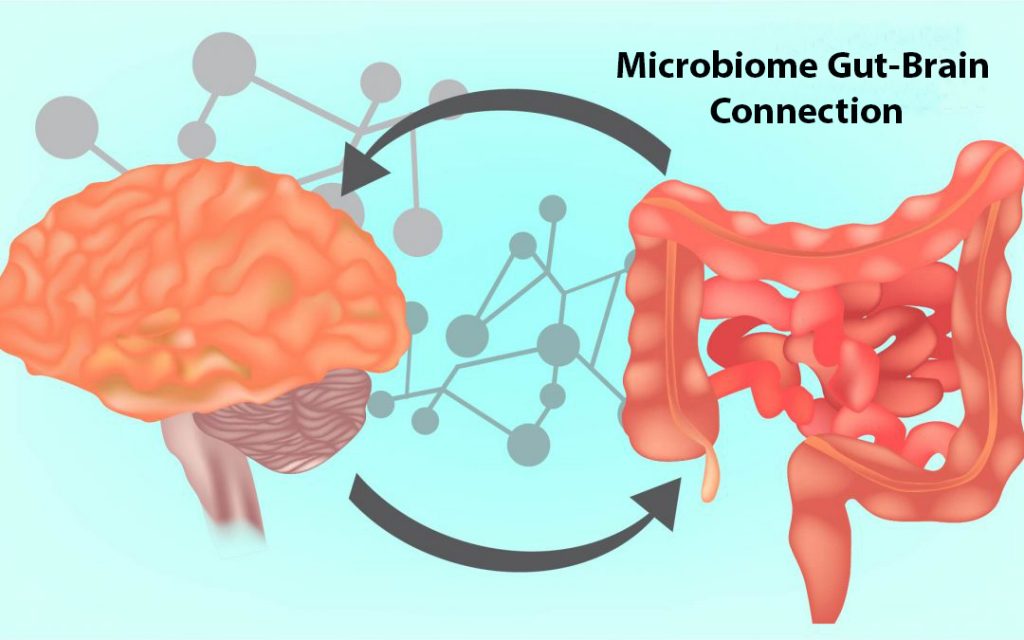 All of us have had “gut-wrenching” experiences. Did your last big presentation give you “butterflies” in your stomach? Have you ever felt like you were nauseous or having your stomach “in knots” after an argument or unpleasant encounter?

We have used these expressions for a long time, but there is a reason. The feelings in your stomach are much more than minor sensations, they are your gut communicating with your brain!

What is the Gut-Brain?

Did you know the gut and the brain are connected? Your gut actually tells your brain what to think and feel. Researchers have discovered that a nervous system in our gut communicates with the brain in our head!

The brain in your gut is made up of millions of “microbiota” consisting of good bacteria, fungi, and even some viruses.  Healthy gut microbiota is important to human health and your immunity.  Good probiotics and a balanced microbiome are necessary for hormonal metabolism, detoxification, and neurotransmitter production.

So how do the two brains communicate? Through the nervous system.

The gut-brain is connected to the brain through the Central Nervous System (CNS) and by the Enteric Nervous System (2) (ENS). You have probably never heard of the ENS and it plays an important role but first you need to understand the role of the Autonomic Nervous System.

The ANS runs several functions all by itself. You don’t even need to give it much thought. It runs unconsciously on automatic pilot.

The ANS has two parts:

Now back to the ENS and why it’s important. Your ENS takes in information from both your Sympathetic Nervous system and Parasympathetic Nervous System. How do the ENS know what is going on in the SNS and PNS? Through the Vagus nerve.

The ENS is in constant communication with these systems through the vagus nerve (3). The body’s longest nerve, the vagus nerve runs from the brainstem to the lower part of your intestines. According to this article (4) the Vagus nerve helps control your mood, immune response, digestion, and even your heart rate!

The Vagus nerve is a two-way highway.  This highway delivers messages from the nerves in your gut to the nerves in your brain. Your gut contains the largest area of nerves outside of the brain. What’s the connection between your gut microbiome and your nervous system? A healthy gut microbiome is linked to a normal nervous system function. Hormones, neurotransmitters, and immunological factors are known to send signals to the brain either directly or via autonomic neurons. Your gut bacteria, such as one called Lactobacillus Rhamnosus, contains a neurotransmitter that helps to regulate brain activity and can help to calm anxiety.

According to this article, the gut microorganisms are capable of producing and delivering neuroactive substances such as serotonin and gamma-aminobutyric acid (GABA) which act on the gut-brain axis. (5) While most people think that serotonin is produced in the brain, most of the serotonin is being produced in the gut! (6)

If the signals coming into the ENS are equally balanced, you feel evenly balanced.  Both your gut-brain and your regular brain are happy.

The Gut and Anxiety.

We have always assumed that moods and neurological disorders were in the brain– but we have seriously underestimated the gut microbiome. We have always been told that anxiety is caused by a chemical imbalance in the brain, new research is pointing more towards the microbiome in the gut.

There are several ways the gut can influence your anxiety and depression.

By influencing your stress response as mentioned before, with an imbalance of fight or flight. The second way is through the leaky gut, when your cell lining is not as tight as it should be, your Paraysmetich Nervous system and Central Nervous System may not be in balance, and being out of balance causes improper emotional responses (7).

Last, chronic inflammation is caused by mold biotoxins such as mold mycotoxins unhealthy viruses, parasites, heavy metals, and toxic chemicals, including many medications. Antibiotics can kill healthy bacteria along with promoting abnormal yeast and fungal overgrowth. Genetically modified foods covered in glyphosate (Round-up) are also big culprits. When harmful gut inhabitants take over and influence the Vagus nerve, this can lead to depression and anxiety. Many patients think they have a neurological disorder but actually have chronic inflammation due to mold and other biotoxins.

Did you know the gut microbiome contains approximately 100 trillion microorganisms that influence our health?  It’s hard to think of one chronic disease that has not been associated with an imbalance in the gut microbiome. It seems as though when someone is sick there are always sinister microbes around somewhere.

Your diet is most likely contributing to your symptoms (8). Unfortunately, the Standard American SAD diet, full of pesticides, antibiotics, food additives, GMO’s, high fructose corn syrup, and lacking in micronutrients contributes to an unhealthy gut microbiome.

If you are vegan or omnivore or living on a diet of fast food or natural organic, each of us has a different gut biome. More studies (9) are showing we can improve symptoms by altering our diets.

Fiber- Be careful of trying to just add fiber as recommended. The right type of fiber and the amount matters helping to promote good health probiotic species. The wrong kind can contribute to SIBO and SIFO symptoms. You can learn more Here (10).

Food Additives- While they may be allowed under the FDA regulations, that is not a guarantee that it is not disrupting your gut health. Along with those listed about emulsifiers have been shown to be “aggressive” when it comes to gut health.

Fermented Foods and Beverages-your natural probiotic (11). Used by different cultures for centuries, they are a good way to get your gut biome back in shape. We have an entire article on Fermented foods Here (12).

Antibiotics are important when used properly. They have saved countless lives over the last 80 years they have been in existence, but even a single antibiotic dose can affect your gut health (13). The purpose of antibiotics is to destroy harmful bacteria. Problems occur because the antibiotic can not tell what is healthy bacteria and what is unhealthy bacteria in your gut microbiome. Overuse of antibiotics has come under scrutiny in recent years. When you request an antibiotic for your physician, and they give in to your request when what you really have is allergies, a cold, or a virus you are getting more antibiotics in your system than you need.  Something else to consider, unless you are eating certified organic all the time, you most likely are in ingesting antibiotics from your food.

While it was previously thought that after a course of antibiotic treatment your gut would return to normal, recent data tells a different story (14). The healthy bacteria in your gut may not return to normal levels.

If you and your physician have decided to do need a round of antibiotics there are ways to protect your gut. The team at Carpathia Collaborative can help you heal the issues associated with a disrupted gut biome. There are also many botanical protocols that can be used in lieu of prescription antibiotics depending on the problem being addressed.